We departed the fossil and prehistoric era and having explored some Gold Rush times with the Kam Wah Chang Museum. All along much of our route, we had been following the Oregon Trail and reading some of the historical markers. So, we chose to cross I-84 and follow SR 86 to the National Historic Oregon Trail Interpretive Center. SR 86 is the Hells Canyon Scenic Byway.

The center sits up on a rise and from 86 one can see a rough circle of covered wagons. A really big facility the lobby opens right on to the Oregon Trail. As we walked past two ‘men’ with a mud stuck cart, a covered wagon with a family walking beside it on our right and Native Americans looking over the wagon train. Are those things called dioramas? Well, these were life sized and realistic. Traveling in these primitive homes on wheels did not look like fun at all! Children walked barefoot over the grasses and rocks, women had shoes infrequently and most of the men had boots on.

The wagons themselves – Praire Schooners – were small and could be made water tight. They shouldn’t be confused with Conestoga wagons – the Semi tractor trailers of their day, often pulled by huge teams of oxen or mules and used for transporting freight.

The trail winds through different conditions: there is a display of a night scene that changed with the direction of the ‘firelight’; hanging from the ceilings were snippets from the many diaries women kept of their journey; a scene portrayed deaths along the trail and the shallow graves quickly dug as the travelers moved on; even a wagon we could look into to see the belongings considered essential. At a certain point along the trail people began getting rid of their treasures as feed and water ran low and their animals reached exhaustion; chests, spinning wheels, barrels…

Researchers debunked some of the myths perpetuated by Hollywood about the Oregon Trail and it’s travelers. A fan of western movies as a child, I was surprised to learn that attacks by Native Americans were rare and that many people died of disease (cholera), lack of water or starvation. Between 20 and 30,000 people took to the trail and as many as 1 in 10 died before reaching Oregon. Another myth was that there was one Oregon Trail route – there were several choices people had to make as they encountered rivers, rocky outcroppings and other challenges. How about this? We might picture all the wagons rolling along in each other’s tracks – in reality most of the time, the wagons spread out and came together only when necessary.

Not many miles away from the more populated trails, were the Mormon travelers. Due to discrimination and persecution they kept to their own trail and chose their own route – though it often mirrored the Oregon Trail.

Great experience – one of the trails they offer let us walk right in some wagon ruts (damaged by disrespectful people stepping on their edges, btw).

We moved on that day and made time to Boise, ID. We camped at Hi Valley RV Park, a very large commercial park. For RVer readers who decide to stop in there WARNING! their driveway has a huge curb cut for drainage and your vehicle/s will drop down and pop out of a gully! It was a peasant enough stay, however.

In Boise we made our way to the World Center for Birds of Prey. Run by the Peregrine Fund, this small Center offers an exhibit of Condors and some very unusual other birds of prey. We observed the birds indoors and went out to a small amphitheater to watch the professionals fly some of the birds. They flew right over our heads, landed on posts near the watchers and generally performed some acrobatics – considering what species they were. First up was a Great Horned Owl. This bird was massive – almost 2 feet tall! He made a majestic sight as he silently glided overhead. We watched the Aplomado Falcon, Harrises Hawk and an American Kestrel. 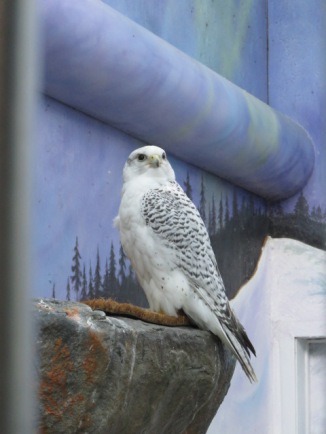 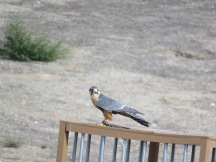 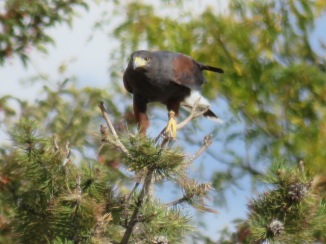 World Center for Birds of Prey

We recommend the center for birders and raptor banders and lovers – everyone in the crowd was enchanted – so it’s worth a stop.

Of course, we got a bunch of shopping taken care of – walmart manages to stock just enough RV supplies that that we walked in and out with TP and tank enzymes. I do have to say, that walmart was the most surreal of any we’ve been in! We try to shop local stores with large Organic produce and product supplies – even the occasional farmers market works out.

The weather was rapidly changing and the mercury was dropping! We decided to head over to Bellevue, ID to see my friend, Nan Riley. It has been a long time since we were in fourth grade together!