To get to Dinosaur National Monument we went south through Heber, UT to take SR 40/191 and reach Jensen, UT. Because both of the campgrounds at the Monument had shut down water & electrical for the season and freezing temps were predicted, we stayed at Outlaw Trail RV Park. The park management was very nice, they have gravel sites with small trees (but go in about 15 years and maybe you’ll find shade). We were plugged in which, with the cold, made a good amount of sense.

Crossing 40 and heading up to the Visitors Center to figure out how to get to the Quarry was super easy. There were so few visitors at the Center, rangers let us drive right up to the Quarry. From the bottom floor and a second balcony, one can see so many bones and a few skulls. In Quarry rest 1500 fossils embedded in the rock. 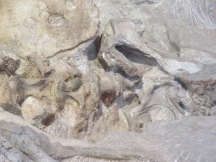 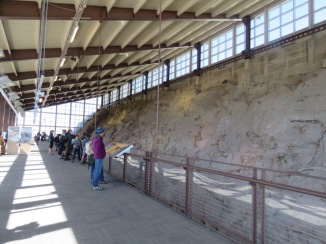 Scientists figure that around 500 dinosaurs of 10 species died during a terrible drought somewhere up river. When the drought ended, the bones were whooshed away to be deposited locally. Of course, the ‘river’ has gotten covered over by hundreds of feet and then etched it’s way to it’s present level over millions of years.

Paleontologists found a rare Camarasaurus in the quarry! I am going to ask you to look this guy up on the internet – I couldn’t get a picture that captured it’s stripey skin! 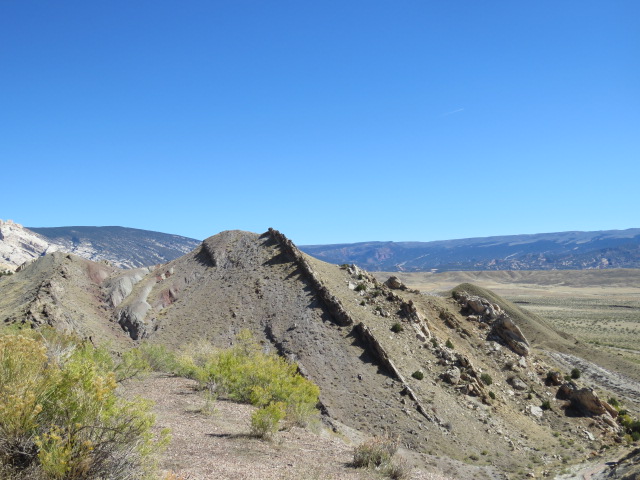 The next day we took the park and a farm road to follow the Tour of the Tilted Rocks – with a brochure ($1.00). We stopped at the markers but I’ll only share two of them here. 10.9 miles along the way we pulled out to park. High above the road we could see petroglyphs carved into the Desert Varnish by the Fremont peoples around 1000 years ago. We climbed the steep trail to the ledge below the art work feeling awed at the time, creativity and energy it took the people to create these amazing works. There is a huge lizard with two smaller ones climbing up the cliff, a flute player and some traditional necklaces and people. 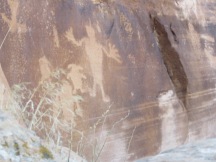 At the end of the main road is Josie Morris’ Cabin. She was a superwoman pioneer who ranched cattle up at the end of a canyon. She built her own cabins – the last one in 1935, and took care of herself. No electricity, phone or running water, Ms. Morris lived as she wished. In 1964 while feeding her horse, she slipped on some ice & broke her hip. She crawled to her house and friends found her there several days later. As they drove her out of the canyon, she remarked that she felt would never again see the home she had built. She died that spring at 89. 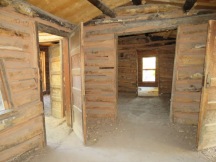 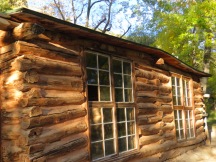 The monument has many trails for hiking, biking and walking. We went down to the Nampa River and a campground to see Steamboat Rock (the biggest pic above) and take some photos. So beautiful, we both longed for a fishing license!

See you next time, Breathe!