You can’t go wrong visiting the Harriet Tubman Underground Railroad National Historic Park in Church Creek, MD, near where Harriet was born. The park is a celebration of enslaved peoples and their supporters. It is made clear that:  “The Underground Railroad refers to the actions of enslaved people escaping to freedom, those who helped them, and the sites along their journeys.” Harriet Tubman was one who was enslaved, gained her freedom and “determined to free [her loved ones].”

Through life sized dioramas, recorded stories by Moses Gandy, photographs and movies, visitors learn of the peril of trying to escape slavery. The story is told of Tubman’s life and her fierce courage in becoming a nurse and spy for the Union Army (she was the first woman in US history to plan and lead an armed assault), living in New York and fighting for Women’s Suffrage, and founding a home for the elderly and disadvantaged. Small and mighty would describe this woman who devoted her life to improving the lives of others.

Nearby, in Cambridge, MD, you’ll find the Blackwater National Wildlife Refuge. Blackwater was established in 1933 as a refuge for migratory birds. It included close to 30,000 acres of tidal marsh, mixed pine/hardwood forest, managed freshwater wetlands and cropland. Our hikes and bike rides through the park yielded views of the endangered Delmarva Peninsula Fox Squirrel and Bald Eagles, Osprey, and the brilliant-yellow never-stop-hopping-butterballs, prothonotary warblers.

[I have no photos of the above splendid and educational stops. My hard drive got drunk and crashed into some hot location unknown. Some photos, not all photos, were consigned to the same place single socks seem to disappear. I will apologize for it, the new hard drive was hired based on it’s sobriety.] 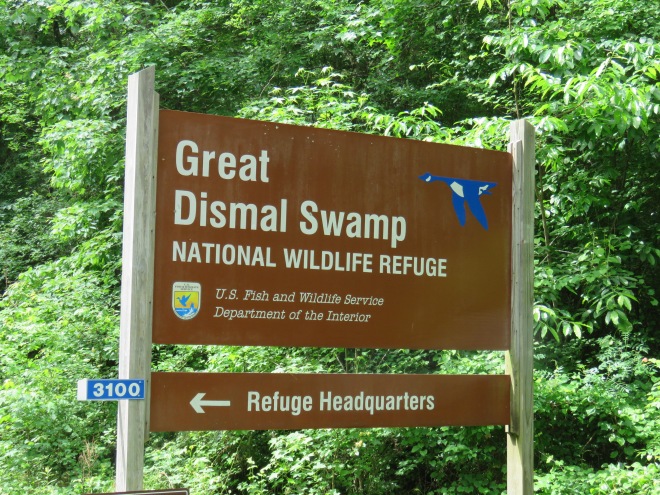 If you’re nearby in Eastern Virginia, you must visit! “The Great Dismal Swamp” conjures up so many images in my mind. When you hear that name, do you have an image of venerable cypress trees festooned with gray Spanish moss lazily stirring in the breeze? Deep green shade, twisted limbs dark against water that the sky illuminates occasionally, broken pieces of mirror glass shining up from tea colored waters? 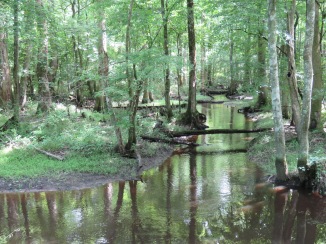 The Great Dismal Swamp National Wildlife Refuge was once over a million acres, 2,000 square miles, stretching from the Atlantic coast eastward to the bottom corners of Virginia and North Carolina. Contained in the vast wilderness were hardwood forests, islands, cypress trees, one of two natural freshwater lakes in Virginia, communities of people and countless species of birds and mammals. Her sister swamps, here on the Atlantic Side of the south are; the Everglades and Big Cypress Swamp in Florida, the Okefenokee Swamp in Georgia, and Congaree Swamp of South Carolina (Congaree is on our bucket list so we can claim to have been in all of them!).

George Washington, first President of the US, when young, was a surveyor mapping out drainage ditches to tame the swamp into agricultural-ism (ha, what silly humans). 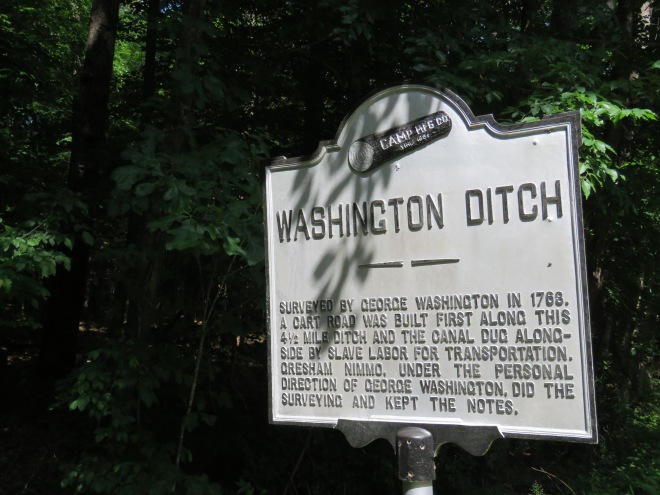 Covering 2,000 square miles in her glory, the swamp is 10% of that size today. Dismal has been occupied for around 13,000 years beginning with Native American coastal tribes. Communities of people who found life outside the swamp untenable found shelter in the swamp. As colonization expanded, Native Americans hid in the swamp, enslaved peoples ran deep into the swamp to find freedom in it’s dismal depths. Today, the swamp has been tamed and trimmed to 112,000 acres bounded by canals and roads, city and bus routes.

We walked boardwalks and trails in the swamp. Snakes were plentiful, wood ducks, osprey, bugs – bugs – bugs, and a rare and amazing three-toed salamander went after a meal next to a boardwalk (nearly scaring me out of my skin!) with splashing and bubbles trailing. 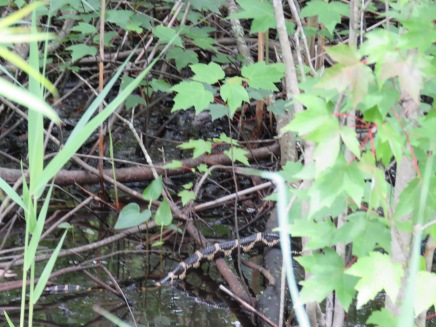 Lake Drummond, 3,100 acres, is an easy drive on a gravel road from the western edge of the swamp and is a beautiful dark tea colored lake. It’s a bit of a weird one though since originally there weren’t any streams emptying into the lake! Just where did this lake come from?

The Albemarle and Chesapeak canal was completed in 1858. By 1973, when the Great Dismal Swamp NWR was created, humans had completely decimated the swamp ecosystems.

Dr. Daniel Sayers, professor of archeology at American University, and his students uncovered a hidden world in the swamp. Over the years their research has shown that Maroons (from the word marronage, meaning “to flee” or “to be removed”) lived in around 200 square miles of undeveloped woodland deep in the Great Dismal. As many as 50,000 maroons, who found permanent freedom in the swamp, lived in complex communities. In addition, researchers have found that Native Americans, enslaved canal workers, free African-Americans and outcast (criminal?) Europeans lived in the swamp and traded with the marroon communities.

Old Hwy 17 forms the Albemarle and Chesapeake Canal Bike Trail. The canal has been continuously working, it is the oldest operating artificial waterway in the country and is part of the Atlantic Intracoastal Waterway.

A good place to start your ride would be in North Carolina – there is a large parking lot, bathrooms and a welcome center devoted to the bike trail. Riders can go either way “up” or “down” the trail. We enjoyed the ten mile trip out we took south along the canal next to fields and old Canal stations. The trail is mostly bounded by tall hardwoods, shady and cool so the 20 miles total were not made arduous by the heat.

The Dismal Swamp State Park Welcome Center, north of the bike trail and just across the border in North Carolina, has bikes to borrow, boardwalk trails and hiking trails to explore. It sits on the Albemarle and Chesapeake Canal – you cross a bridge over the canal, if there isn’t a boat going through. The center is large and interpretive displays explain the swamp ecosystems and the preservation and restoration work done in the swamp. We attempted a ride on the wet dirt and sand roads of the State Park, made it a couple miles and gave up – gave in to the bugs, the mooshy mud road and turned around to go to the lovely paved ride down the road.

The Dismal is as good as it’s evocative name suggests. Books have been written about the Marrons, the early inhabitants and the Underground Railroad into the swamp; I sure could see someone writing a rousing Civil War mystery about the (then) incredibly endless swamp.

As Annie Lamott writes in “Hallelujah Anyway”… here, I apologize for copying out her words… they speak so to my heart. With hope you will procure the book, as have I::

“The path away from judgement of self and neighbor requires major mercy, both giving and, horribly, receiving. Going without either of them leads to fundamentalism of all stripes, and fundamentalism is the bane of poor Mother Earth. Going without engenders blame, which offers it’s own solace but traps us like foxes. We trick out box traps with throw rugs and vases, until the pain grows too big. Then the only way out of jail is forgiveness.

There should be an app, with a checklist or map. But no, the way out takes admitting you are wrong and sorry. No, no, anything but that. Forgiving people makes you weak. Push them away! Lewis Smedes said, “To forgive is to set a prisoner free and discover that the prisoner was you.” But I can’t launch forgiveness of my own volition, from my air-traffic controller mind. We avail ourselves through failure, service, singing, silence, sorrow.”

Humbly attempting to challenge a well embossed pattern here… I am in the process forgiving myself for (so many things…) not writing in this space for a time. Having passed judgement on myself and found imperfection and failure, I retreated and pushed writing (my soul’s balm) and you away.  It took a bit of time for me to bring the airplane home safely and land myself within my own forgiveness.

These particular travels, April – June, have taught me much about signing up (arranging, scheduling, reserving) for nearly continuous stimulation, experiencing new places and people without setting aside time to let them inhabit and develop. Without time for contemplation of all that action or for time for unpacking. Skimming along at the speed of, what – I don’t know.

The next post, written early in this month, June 3 and summarily banished. Written from the passenger seat while driving to The Next Destination (TND), re-read and disgustedly banished from my screen as we arrived at TND because it was so fragmented and senseless. Because it was a blow by blow without the heart of the experience.

Hidden in a folder until today when I was finally sweetly, forgivingly able to read, reorder and calm the chaos. I honor that time of writing by posting for you the following experience.