I have a confession. My grandpa Tom took my sister, Diana, and me to Disneyland in Anaheim, CA in 1956, 57, 58, 59… I’ve returned there many times and gone to Orlando. You have to know, I was 6 the first time I went to Disneyland. The experience left an indelible mark on me; particularly the Frontierland Railroad. There were rocks of all colors above and around the train, sometimes they were hoodoos and sometimes the top rock wobbled around as we went under it. The train went through a canyon and there was an old mine tunnel.

Well, we’ve been traveling through the very country that might have inspired the artists and creatives who helped Walt Disney imagine that train ride. I haven’t seen any wobbling rocks above the RV but darn near everything else Disney threw at me, I have seen and gawped at over in the last couple of weeks.

Cove Palisades was the first of several gorges we would encounter and we were impressed by it’s walls that towered hundreds of feet above the lake. But…

We took off down Hwy 26 – a short drive to the John Day Fossil Beds National Monument Painted Hills Unit where we parked the RV, ate lunch, unhooked the car and drove up to the Painted Hills. While we were at the little Visitors Center, Barb was able to help some folks from Holland diagnose the problem they had with their rental RV slide (fuse). She didn’t have the fix, but told them they could switch fuses until they could get to an auto parts store. Go Techie!

It would be hard to describe the colors of the low hills to you, luckily we got a lot of photos. The rock was porous, mounded in bands of color and seemed terribly vulnerable to a good rain storm. Colors ranged from rusty (Iron oxide) red to lavender. It was almost too colorful to be real. We hiked several of the trails and made our way back to hook up and try for a campsite down the road.

And… landed at Clyde Holliday State Park on the John Day River. This is a small campground – 35 sites or so; first come first served. We pulled in at about 3:45 and by 5 it was full. They had overflow parking (built in anticipation of the eclipse) and almost every night those side by side parking spaces had a few rigs stay over (think truck stop style). Clyde Holliday is a really pretty park with a long walking trail along the water. But mostly it’s a great place to jump from to have more of the fossil and museum experience!

First order of business for the next day was to go to the Thomas Condon Paleontology Center and the incredible museum there. These are fossil beds, not the land of dinosaurs. Archeologists and geologists have found thousands of mammal specimens. You walk through depictions of the various geologic ages and specimens are used to give structure to the animals of each age. They did talk some about how forensic paleontologists fill in the creature from bits of bone, a burning question you will have to go there to get answered!

Let me give you some teasers: The Haystack Valley Assemblage (Asmb), Turtle Cove Asmb, Kimberly Asmb, Clarno Nut Beds and more! Each of these are an era millions of years ago. You must go to this strange and wonderful place. 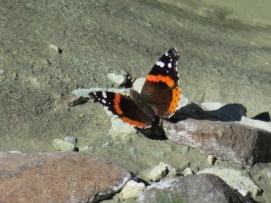 We also took the really nice Blue Basin trail. It was a 1.5 mi trail up into a Blue Basin (really blue, really). It took us about 4 hours because you-know-who was birding and photographing the birds. I decided I never need fear getting tired hiking with Barb, I usually end up spending a fair amount of time standing around or leaning on a rock. Great easy walk and some good birds but the blue rock stole the show.

Next day we went into John Day to check out the Kam Wah Chung State Heritage Site. This place is a treasure and quite a story. In the 1880’s two Chinese immigrants bought an old building – perhaps it was once a trading post, this is the Oregon Trail after all. 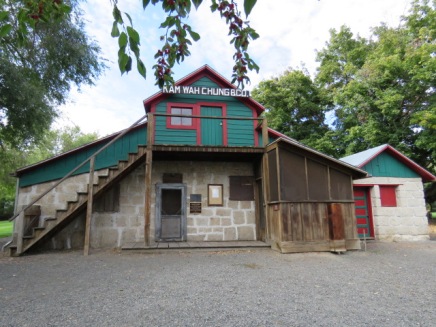 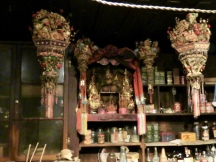 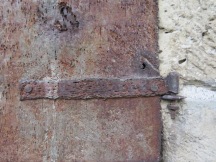 Their names were Ing Hay and Lung On. They converted it into a very successful business; not only a store for both the Chinese and White communities but an apothecary. Ing Hay was a talented healer who used the science of pulses and his deep knowledge of and collection of Chinese herbs. He was known as Doc Hay and healed both the Chinese and White folks within almost 50 miles. Lung On was a canny businessman who became a Mason, opened the first car dealership in the area, read and wrote letters for the Chinese community (before the gold rush became a waddle). Lung On died in 1940 and was given a Masons funeral.

This is the cool thing. The place was closed up by Doc Hay and his nephew in 1948 after he broke his hip and had to go to Portland to get healed (where he died, ahem, in 1952). Both men are buried in John Day.

Sometime in the 1960’s the building was set to be razed. A member of the historical society was there and suggested they just open the door to see what’s inside. The place was virtually untouched from the time Doc Hay sealed it shut. Some small damage from kids seeking firecrackers and from time took some restoration and the place is now set up as it was when Doc Hay left it behind. It includes the over 500 herbs and many documents, books and writings that preceded the Cultural Revolution. Chinese scholars have examined the contents of the museum and pronounced it the most complete and intact place of it’s kind in the world & they’re still trying to figure out what all the herbs are!

I am including some pictures, but please, if you get a chance, try to get out Hwy 26 to go to the Interpretive Center and Museum. It’s worth every second you will spend there and some. Ranger led tours start at the top of the hour.