It’s Memorial Day. We spent a lazy morning doodling around with things. Barb worked on a solution to a crushed 12v plug problem. We cleaned house and explored the park some.  This afternoon we went to the Steamboat Arabia Museum. Highly Recommended! Steamboat Arabia

Really interesting story of how five guys and their families decided to go treasure hunting for a the Arabia in a cornfield in Kansas. They found the Arabia (with no outside funding or archeological help and no money for curators), dug down to her well preserved remains and brought to us her 200+ tons of cargo – most of it undamaged.

The Museum hosts the largest collection of frontier goods anywhere in the world. Not a gigantic scale museum and laid out by the discoverers in department store style displays (remember, no curators or archeologists involved?). The Museum has a very small lab, preservation techniques and more than 3/4 of the collection yet to preserve. 4000 pairs of boots and shoes for children, women and men in a variety of sizes, for instance, will take the next 10-15 years to process and preserve.

We sniffed perfume that we well preserved in the anaerobic environment deep beneath Missouri River mud. One of the discoverers said (in the movie) he ate a pickle and it was as sweet and crisp as it was when it was shipped! I know I wouldn’t have done that but Susan would have. Anyone else want to volunteer?

The museum was happy to provide a transcript of the talk the guide gave and closed captioning for the film. I haven’t mentioned how important those gifts are to me. I’m severely hard of hearing. Movies and some patterns of speech flummox me! 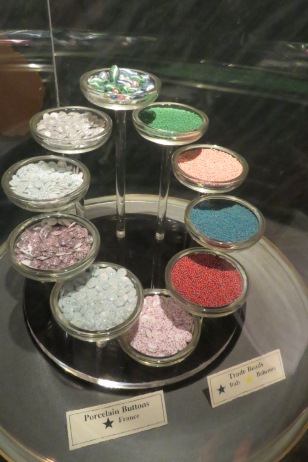 Everything for the dry goods store.

Shoes were made on straight lasts, hard to tell pairs! 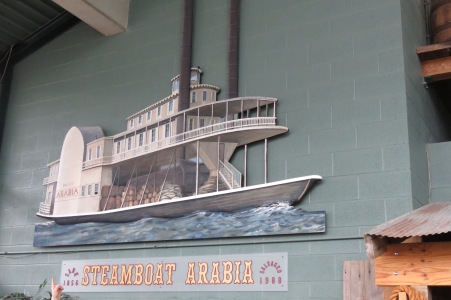 Everything for the dry goods store.

Shoes were made on straight lasts, hard to tell pairs!

This evening as we planned our visit to Independence, Mo, cooked and ate dinner, we were serenaded by the evensong of several thrush calling the day to end. Ethereal.

Our etherial evening was interrupted by that screeching tone on our phones “TORNADO WARNING TAKE COVER IMMEDIATELY.” Having become ‘old hands’ at this tornado stuff, I grabbed my pill case, Barb grabbed our important paper clutch we slid into our ruby slippers and drove to the bathroom.

No rain, rumbles, sky gray zip to dark, lightening, deluge.  Every 15 min, I peeped out the door (no water, 1/2″ water, 4″ water…) and within 45 min, there was only a drizzle and the sky had gone back to gray. Okaaaaaaay.

Luckily the Memorial Day crowd (over 300 people) was gone. There were 12 of us in our shelter (B & I had our own shower room, lol). Our camp hosts were troubled, 300 people crowding the two bath buildings?

At least the night was peaceful. Rainy but no more squealing phones.

Next day the camp host reported that a tornado had touched down 1.5 miles (road, not crow flies) away from where we were sitting.

If nothing else, Barb and I are intrepid.