We’re staying at Gulf Shores State Park and being back in our second home has inspired me to get our last trip’s posts up and finish that chapter.  It’s been insane since we got ‘home’. Not only was there tons of yard, neighbor and house catch-up but Alabama faced a Special Election and we dove in to support Doug Jones! Luckily there was enough to do that we were put to good use knocking on doors. It sure wasn’t due to our meager efforts that Doug got elected, but it felt so good to do something to counter the insanity.

Crazily, we also decided to join the Jubilee Pickleball Club and learn to play pickleball. It’s crazy fun and Barb has taken to it like a duck to water. Problems with my right hand have gotten in the way for me – almost as much as mastering the scoring system (you know how I am with numbers).

We decided on a staycation for Christmas to get our heads clear and enjoy time with our friends Ray and Cindy down here near the Gulf. Good thinking! I got clear enough to have time to sit and get this posted! Yaaay!

We said goodbye to Stroud, OK and headed down to I-40 again (can you tell we’re anxious to make tracks?) and spent a two nights at Robber’s Cave SP down near Wilburton. Really a pretty park and I wished we could hang out a bit longer as there is a fishable river and lots of hiking. We did manage to take in some overlooks and went up to the cave – the ten million people walking up the path dissuaded us from following suit. This park has a big equestrian campground with small corrals and places to tack up one’s horse. Really a lot of folks using it and the sight of so many pinto and paint horses was a real treat.

We trekked across OK-270 through some little towns and lots of trees into Arkansas. AK-270 is a good road, made the interstate look raggedy (big surprise). We’ve really found that to be true though, the “infrastructure” that the Fed is supposed to maintain is in BAD shape. States do varying jobs of keeping ahead of entropy on their own roads, it’s been quite a study.

After a long drive we pulled in to Hot Springs National Park and found a nice site by the creek. The campground was about half full this time of year and the weather was chilly out of the sun.

A fellow RVillage.com member welcomed us to the park (via email) and told of their experience at the hot springs. The advice seemed sound so we followed their lead. The National Park has renovated and restored several of the old bathhouses – some are used by the park and some will be rented out when they are finished. The history of this area begins with Native peoples and their use of the natural springs that come (came) right out of the mountain. The waters from the various springs have different minerals in them and there have always been claims as their healthful nature.

The Fordyce (above), opened in 1915. Opulence went to the men’s side of the baths and utilitarianism to the women’s. In fact, so many women came for the baths and treatments offered that the owners had to add space to accommodate them! The building is now the Park Museum. Free. Yes! it’s free to enter. There are three floors and a basement and we climbed around, poked at the very weird machines that were used for ‘treatments’ and looked at pictures of gentlemen and ladies at leisure and taking the baths. 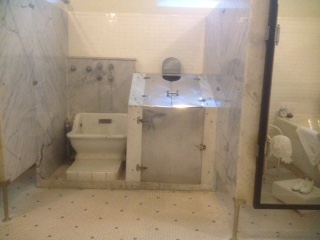 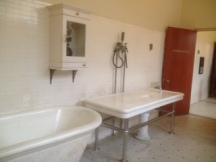 Folks really considered the waters to offer them relief from many maladies – it was a very serious health trend in both Europe and the US. No more bathing at the Fordyce, though it really is a wonderful trip back in time.

On the advice of our mentors, we went to Quapaw Baths (no photos, sorry). Built in 1922 and renovated through an agreement with the Park Service and local businessmen, the Quapaw offers a modern spa experience. We chose this spa because it offered four large tubs that moved from 94* to 104* and we could migrate between them with other bathers – this is not clothing optional, much to my relief! We availed ourselves of the massage services as well but fore-went (?) the cave experience, authentic underground steaming hot cave. I could have spent all day in the water but we had the massages to undergo (lovely) and then headed home.

The other functioning bathhouse is on our list for next time. “Because it has been in continuous operation since it opened on February 1, 1912, it is one of the best preserved of all of the bathhouses on Bathhouse Row, but it has undergone many changes over the years. Originally it had a large hydrotherapeutic department. Only it, the Fordyce and the Imperial had these.” NPS website. In this spa bathers have a private tub to enjoy and move from there to the other bath services.

There is plenty of information on the NPS website: https://www.nps.gov/hosp/learn/historyculture/bathhouse-row-today.htm should you wish to hot-foot it to this unusual National Park and avail yourself of the baths.

Did you know the town pretty much went to pieces when the local sheriff and the feds shut down the illegal gambling houses in Hot Springs? Yes indeed, Al Capone (who used to be a regular at the Ohio Club (below) and the rest of the gang left town and that was that! Years of decay later the NPS stepped in to save the day and history is again yours to enjoy.

Our RVillage.com pals told us about Crater of Diamonds State Park south and west (wrong direction, girls!) of Hot Springs and we decided to head over there and check it out.

Down AR-70 to Murfreesboro (which I always thought was big but really isn’t) and out some country roads to the park we rolled. The park was pretty empty and the day drizzly but we got set up and headed over to park HQ to check out the little museum and find out about what folks needed to do to dig up diamonds.

First. This place is for real. There were diamonds of several colors on display at the museum that had been found in the park. Very cool was a photo of a big yellow diamond from the park that had been made into a beautiful ring that the First Lady Hillary Clinton wore for both of her husband’s inaugurations. Lots of other stones are found at the park as well, jasper of several colors was the only one I knew.

No photos. It was an ugly, wet, cold, muddy time and neither of us thought to bring our camera. We’re sorry.

Next day, we put on rain togs and headed to HQ to pay the fee and go rent a bucket, camp shovel and two sieves. There is a nice concrete sidewalk leading out to a big plowed field and we ‘miners’ just picked a spot, dug up some dirt to fill the bucket and headed to one of the many covered sluices.

Now came the hard part. The water in the sluice was cold and opaque from the rinsing away of the mud shoveled into the sieves – a stack of two wood framed screens of two decreasing sizes. When the frames were full of muddy dirt (did I mention it was drizzling?) they weighed a considerable amount. But, we were game. So sluice, sluice, sluice and when the mud had disappeared, the frames were lifted out of the water (pouring all over legs and shoes…) and separated and the top frame twisted over with a decisive wham to upend on the wooden benches between the sluices – whump! Then the smaller screened sieve returned to the water for more sluicing (cold water, cold, cold water) and it was similarly whumped on the bench at another spot. We then got to pick through the leavings and hunt for diamonds. This sequence repeated about 10 times too many for me… and we didn’t find anything shiny. However!

Next to us was a young lady who had a pile of orange buckets from a big box store, full sized shovel and three screens. She was working away, while she talked non-stop to other folks working in her sluice. Suddenly, she hollered, “Got one!” and tucked it into a little plastic bag. She trotted up the hill to the diamond certifier guy and he got out his loupe. By golly, it was a tiny clear diamond and she came back with the Certificate of Authenticity to prove it! That was really fun to see and share in her excitement.

Though it took a while to warm up and our shoes never did dry until we were home for a few days, Crater of Diamonds SP was a fun outing and another one of those things we never even thought about doing.

Next day we took AR-371 to AR-275 and made our way to Lake Chicot State Park which is part in Arkansas and part in Mississippi. Another big park with a winding river / bayou. Really pretty with huge pecan trees and only three other RV’s. It made a good stopover and has a cute museum about the area.

Next day – we made it to our Hudson’s Bay Stop near home and got ready to unload perishable foods and our clothes (and laundry), cleaned the rig up for next use and began making trips to the house.

It’s been a fun ride and really nice to have everyone along for the trip. I’ve appreciated the texts and comments on RVillage and FB about the blog – sometimes it feels so one sided, it was great to hear from folks.

Next trip? A couple of shorties to ride bikes – Christmas at the Gulf (GSSP has the MOST AMAZING bike trails, miles and miles. In January we’ll go with the Slow Bike Society on a long ride in Florida, I think it’s a Rails to Trails ride. We had thought Alaska was calling for next year but the call faded. Instead, in April we’re heading up to the Catskills which is very exciting for me as I’ve never been in that part of the country! We’re going as Road Scholar students to learn more Fly Fishing skills. The river and streams we will be fly fishing up there were the birthplace of the sport, should be sweet. Of course, no trip would be complete without seeing family and friends along the way. Fellow travelers, let us know where you are and maybe we’ll meet up!

Until next time, happy trails and don’t forget to BREATHE!