On I-40 going into Oklahoma City we decided to stop at Sprouts in Norman, south of OKC. While we were eating lunch, I noticed this beauty and Barb went outside to take some pics.

We picked up some gas as well at a Murphy station (foreshadowing tones of doom sound). Most of the stations in Oklahoma have ethanol free gas available – it isn’t what we usually use, so we passed. We made a quick stop in another gas station to use the air compressor as one of the tires was suddenly beeping the “low tire” warning on the TPM System. That didn’t work out well at all, the compressor couldn’t handle the inflation of an 80 lb. RV tire. It ended up letting air out instead of putting any in (next trip will include a small compressor in a storage compartment).

While pulling out of that station the Trek acted like it wanted to stall. Barb said it felt like no gas – that hollow feeling you get when you press on the gas peddle and nothing happens? But then it engaged and took off again. We both wondered what could be happening but since no dash lights were flashing and the RV was moving now like it should – we decided to continue.

Traveling east on SR9 just outside of Tecumseh, it happened again! That no response-to-pressing-the-gas-pedal started up. Barb said it didn’t feel like transmission or like a broken belt (I thought serpentine belt but we didn’t think the Workhorse engine even had one…). Poor Trek was switching between positive forward motion and no response in the accelerator as we poked up hills and coasted down.

The RV ended up limping into Tecumseh with emergency lights flashing and stopped right in a turn lane. There isn’t much in Tecumseh, but there was a Napa Auto repair right across the street, yaaay! Surely they would have an idea. And… they didn’t. They “don’t work on motor homes and don’t know anything about Workhorse engines”.

No worries. That’s why we have Coach-Net, our on the road break down saviors. They dispatched a tow truck from D & D Towing out of OKC. Meanwhile, counting on the off again – on again nature of the problem, we pulled the truck into a parking lot. The truck that came was large enough for towing our 20,000 lb. bulk and the operator, Sean, really knew what he was doing and had the patience and tools to do it right without damaging the Trek! He carefully towed us about 55 miles North to Poskey’s Auto and Wrecking in Stroud, OK where we spent the night outside the gate.

First thing in the morning we were greeted by Mark, the owner, and James, his best man for the job. Of course, the Trek started right up and behaved nicely driving onto the lot. But a gas pressure check showed low to no-go. Barb told them about the blown fuel pump relay we changed in Santa Fe and the cheap gas.

They checked that again and the replacement relay was already damaged. Diagnosis: “fuel pump needs replacing”. It wasn’t the gas, Murphy has been absolved. Guess what though… the fuel pump sits inside the fuel tank and to access it the fuel tank must be dropped. The original one had to come out so the part number could be obtained!

Remember, we had just filled up the 75 gallon tank about 40 miles ago? Yikes. But Mark and James figured out how to do it without spilling any or draining the tank. (shop jack anyone?). Barb got on the internet and located a Workhorse replacement, ordered it and it was shipped overnight arriving Friday morning (this was Wed. evening). 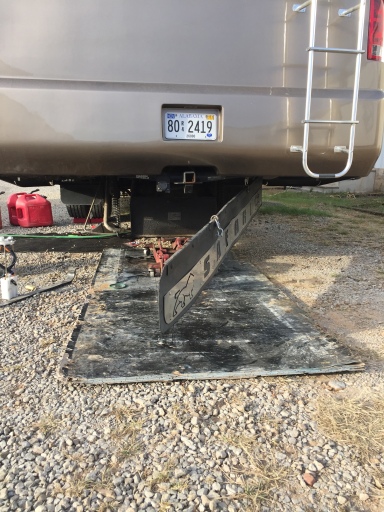 That’s our fuel tank dropped down with a shop jack.

I however, was figuring out that we couldn’t stay in the Trek. The smell of gas was noxious, we were fanny up in the air, and the replacement fuel pump was two days away. I packed up a bag or two, filled all of our water containers, grabbed snacks and got us ready to head to the local hot-EL.

The Hamption Inn in Stroud was sure a surprise. Brand new, ultra modern and clean as a whistle, with staff who treated us like long lost cousins, it became home base until the pump arrived. These were the only two nights in all these months we stayed outside the Trek and it was luxurious! I showered for about 4 hours, watched TV for about 30 minutes, caught up on internet nonsense and complained about the icky, scratchy hotel sheets enough to drive Barb insane!

We went to dinner at “The Rock” a Route 66 time machine with new owners and a super interesting menu. Our server was so friendly and the owner came out to chat us up as well. It was really fun to look at all the old 66 stuff and to talk with some nice people.

The next day we went over to Chandler for lunch at a former Route 66 gas station. Another good meal with friendly folk… it was time for me to experience an epiphany! 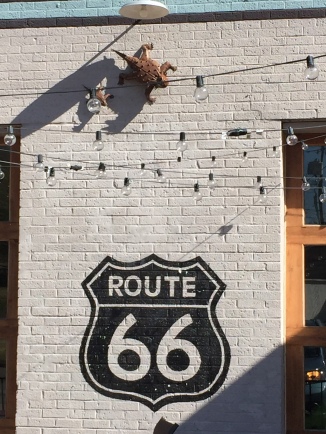 I’d not thought too well about Oklahoma before and really just wanted to get through the state. Here it comes… I realized, during our stay, that I really like Oklahoma! The people are just incredibly friendly – we didn’t hide our relationship at all, folks just treated us like we treated them, offering bits of their lives and the history of the area. I also realized that this state has much to explore and tons of people to learn about. I can’t wait to go back and really dig in to learn about this diverse state folks call “Indian Country”.

Finally, new pump installed (and boy howdy, it was fast once it arrived! We got back on the road again heading for home.