Barb and I used our free day to go back up to Soldotna to visit Dr. Ned and Charlissa Magen and their lovely home. After touring the house and looking at the Kenai River – right outside the front windows! We were treated to some tasty crackers and cheese dip, I wish I could get my hands on that recipe!

Our son, Morgan and their daughter, Maurissa live in Portland, Or. We got to see Maurissa’s two daughters, Julissa and Arianna for a few minutes when they finished their day at camp in Soldotna. They both seemed exhausted and probably didn’t even remember us as we’d only spent time with them last year.

Charlissa and Ned also gave us some cookies and a loaf of Cinnamon Bread from a local bakery – The Moose is Loose.  It was a short visit and our hosts were most gracious about our need to get back to Homer. BTW – Barb shared two slices of the cinnamon bread with Tina & Claudia! Barb just loved that stuff and parsed it out for as long as she could.

The coastline of Alaska is interesting… Not like the Gulf Coast where we live in south-east Alabama, at all! Towns along the Gulf are stitched together by Hwy. 98 a two lane meanderer and soaring bridges over bays.

No, the Alaska Coastline is so rugged that to get from one place to the next requires a drive from the sea, through mountains (they look like MMM and you drive through the middle of the M’s).  Roads snake between peaks that rise nearly vertically from the edge of roads, ponds, rivers and valley. Those guys aren’t super high (no Denali’s down here) but they’re rugged! Of course, most of the tops are ground off by the glaciers that once buried them and there are high U shaped drops between peaks where the glaciers slipped and slid downwards.

We drove back up the same road and took a right at the Seward Junction. The ride is indescribable – or it would take reams paper and thousands of words to attempt. Again, we came through an incredible mountain pass to descend to the ocean.

The Seward valley is well populated and we drove back in through a neighborhood to find our campground.

Just minutes from town, we drove down to the Alaska Sealife Center and parked along the waterfront. Oh boy, did we have fun! The Sealife Center not only educates, protects and rescues sea life, but they house an aviary like none other! The aviary consists of a raised pool, about at eye level for a 5’6” or taller person. The walls have windows to look into the two story deep pool. Rocks surround the pool and viewing area, these climb about 30’ toward an open sided roof. Who lives in this place? Oh golly, how about Tufted Puffins? Murre? Murrelet? Black Legged Kittiwakes with their Red Legged cousins? How about Spectacled Eider? And what about the darling Rinocerous Auklet? Yes indeed, these rescued fowl are right there, no barriers. When Tufted Puffins swim deep, their tufts leave trails of tiny silver bubbles glistening behind. 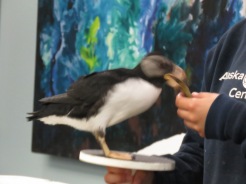 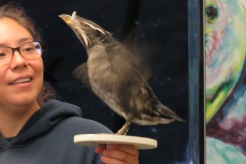 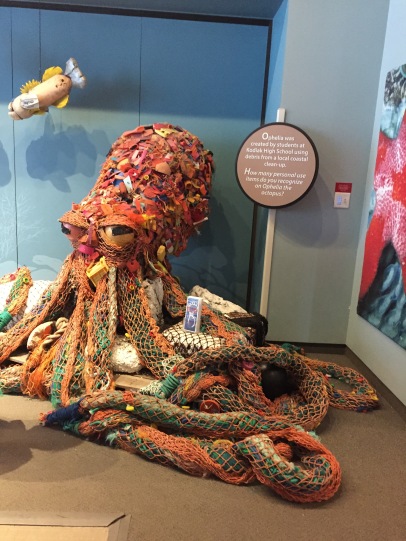 The Sealife Center also hosted us for a “Puffin Experience” – speaking of interesting. We listened to our guide discuss the Center and the birds who make their homes there. She also produced, from several cat carriers, a Tufted Puffin and a Rhinoceros Auklet. Oh my gosh, the Auklet was hatched at the Center and somehow became imprinted to humans – he really likes to hand out doing these talks and showing off! And the PUFFIN! These birds are the toucan’s of the sea with those vivid beaks and sharp colors! Barb and I just loved being at the Center. (Octopus above is made of trash reclaimed from the sea)

Seward also was the jump-off spot for an incredible tour of Kenai Fjords and several glaciers. We watched for whales, had a yummy lunch and chilled out near the glacier. There was lots to do and see, the naturalist from the National Parks Service really was challenged by our group! 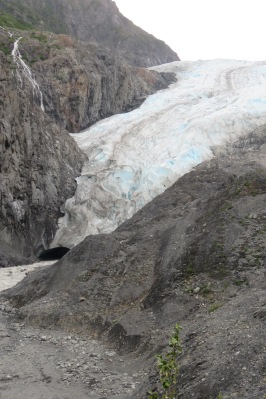 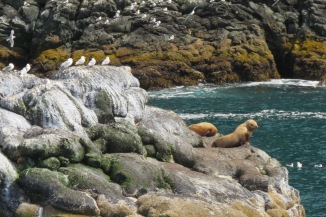 Barb and I went to the National Park and climbed up to Exit Glacier. Even the drive up to the park was educational. Every so often from about 5 miles out a sign reported “1897”, “1910” etc so we saw years of recession of the glacier. As we walked the trails up to the lookout points, we met a couple of rangers. With one, we talked about the plants and edible berries along the trails and how quickly tall trees had filled the moraine as the glacier receded. With the other ranger, up at the second look out, we discussed the rapid melting and slippage of Exit and other glaciers in Alaska.

In the last ten years, there as been more melt and ice loss than in the entire previous 90 years. Read that again. In ten years there has been more frozen fresh water lost than in the previous 90 years. Fresh water. We must have fresh water to live. So… the glaciers melt and in Alaska and many other places, the fresh water goes to the sea and becomes salt water and concomitantly raises sea level.  Glaciers are banks. “Bank of Fresh Water.” Once it’s tapped out, there is no federal reserve.

Here’s a link to a National Geographic article. It paints the picture nicely. Though the article misses the drive up from Homer, another exceedingly scenic route – it says some lovely things about driving in this part of Alaska.

*If I goofed up the location from which the Bear Flights departed, please forgive me. Seward