We left home on the 19th and chose (chose!) to drive what felt like 10 years, to Poverty Point Reservoir SP in LA.

We have been going non-stop for 3 months. For example, we… cleaned out two storage units (property management stuff and some stored household stuff), put on a huge and organizationally complicated yard sale (which, without the help of our friends Sue and Marsh, Laurie, and Ray & Cindy, would have been impossible. Sue & Marsh really worked hard! We sure appreciated everyone’s help and the fun they brought to the sale), removed a cabinet & valences in the RV “living room,” built a cabinet and new valences and installed the lot. We hustled the whole time (with breaks to enjoy meals with friends, lol). By May 19th, we were both anxious to get on the road to get some rest!

While we were hustling, we got to see our doctors. I can’t believe my Nephrologist’s son is in high school, I started seeing Doug before he even got married! I got my Rx scripts changed to 90 day orders (yay!). Barb got tuned up by the chiropractor, the dentist and her doctor. We are cleared for take off!

Barb is the most steady, hard working and tolerant person – for 32 years she has managed, nudged and handled my moody, impulsive and non-linear self. I don’t know how I ended up so lucky!

Back to the choice we made to drive for ten years… Before we left, I got comfy seat cushions that lift our hips out of the valley in the el-huge-o captains chairs and new spine support “boards” to keep our shoulders from rolling forward in those self-same chairs.

And we used them for our first day out. This was a choice, mind. One we both intently regretted at about hour three, bemoaned by hour four and berated ourselves over by hour five. The instructions on the seat and support both say to use them for 30 days (or else!). Barb ditched the cushion right off and we figured out how to support the back support thingie for her. After the initial pain, the pair of supports work great for me.

We camped at Poverty Point Reservoir State Park. Nice park with plenty of space between sites. To get there, we drove through quite a rain storm. The park was WET.  We got in a nice walk and found a tree with these fungi hanging like little lanterns around it’s middle.

After hooking up the RV (A/C for the catz) and hopping in our toad, we set out to visit nearby Poverty Point Unesco World Heritage Site (PP).

Here’s the link to the park:http://www.povertypoint.us 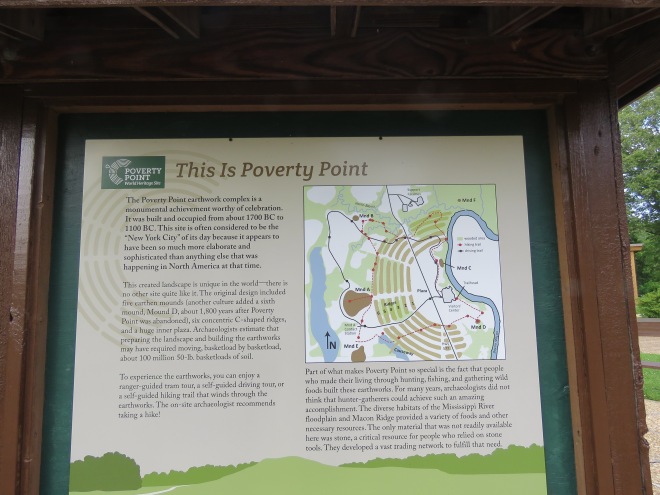 Poverty Point was peopled from 1700 through 1100 BC. Yes, BC. That was the Archaic period. Before Paleo Indians. As did the folks who lived at Mesa Verde UNCESO World Heritage Site, the PP people disappeared from the site for no discernible reason to us modern day humans.

Built on a geologic structure called the Macon Ridge, the mounds are tall structures. Built of what? Well, Macon Ridge doesn’t have any stone. The people carried a gazillion baskets or leather pouches of dirt from nearby areas to create the mounds – I am known to exaggerate, so please check the link I gave you. These peoples of the Archaic period scoured the ground clean before they laid the first baskets of soil down. They created thin layers of black, yellow and red soils as the foundation for each mound. 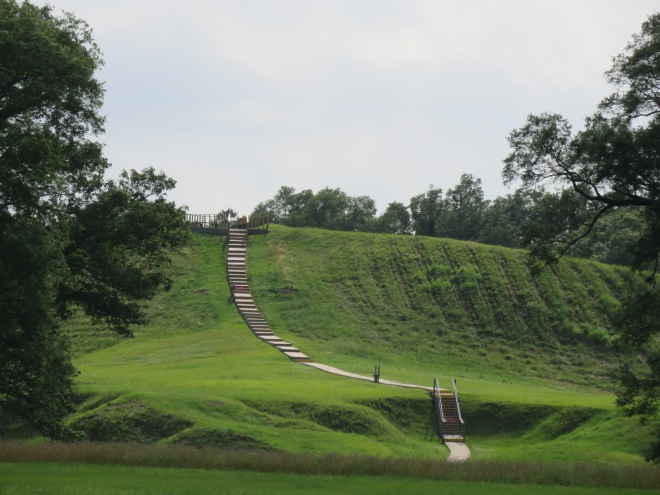 Poverty Point has no human remains. Folks lived there but did not bury their dead there. With no stone on Macon Ridge land, the stones found by archeologists were carried by people walking and in canoes from as much as 800 miles away.

I was astounded by the level of communication, united vision and community effort that must have driven people who lived miles and miles away from each other to create this place. It took the people 600 years to build the site – 25 generations. One unified vision to which people dedicated their lives. Reminded me of the united vision of the forefathers of the US… not that there aren’t huge challenges keeping the states and people in the US united now.

One of the coolest things we saw were rock sculptures – most were under three inches tall – of women. I felt a charge of recognition and awe at these universal symbols of women’s power.

The energy here strummed within me and I was left with a deep sense of calm. Barb left with questions, lots of them.

Thanks for reading along with us,