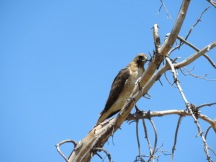 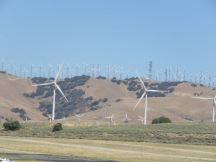 Traveled some super boring country today. Out of Nevada and into California. Every little ‘town’ we passed was thoroughly trashed. There was trash everywhere. Amazing. We’re in California desert and this is by far the trashiest place we’ve been!

One mountain we went down offered us a rather alarming sight. We watched these three standing lights for miles. I finally had to look it up! Turned out to be the Ivanpah
Solar Power Facility. This is the worlds largest thermal solar plant at 6 square miles. There are three huge towers that have miles of reflectors all focused on the tops of the towers. The heat collected there turns huge steam turbines to generate enough power to light up about 140,000 homes – and reducing carbon emissions by 400,000 tons annually. The water is all recycled through the plant so there isn’t much waste. It’s pretty weird looking! The cost of providing all of this power is steep. In 2016 federal biologists said about 6,000 birds had died from collisions of immolation annually while chasing the insects attracted by the towers.

We took I-15 to 58 and across the Tehachapi and stopped at Mountain Valley RV Park. The park is adjacent to a glider port – we got to watch gliders pulled up for launch and then landing. Pretty cool – the Tehachapi Wind Farm in the background was another interesting alternative power source for Calif. Wind farms are also terribly hard on the raptor population. Heck, cell phone towers with their blinking lights cause significant deaths of song birds every year.

The next few days are going to be consumed by business kinds of things so see you in about a week.